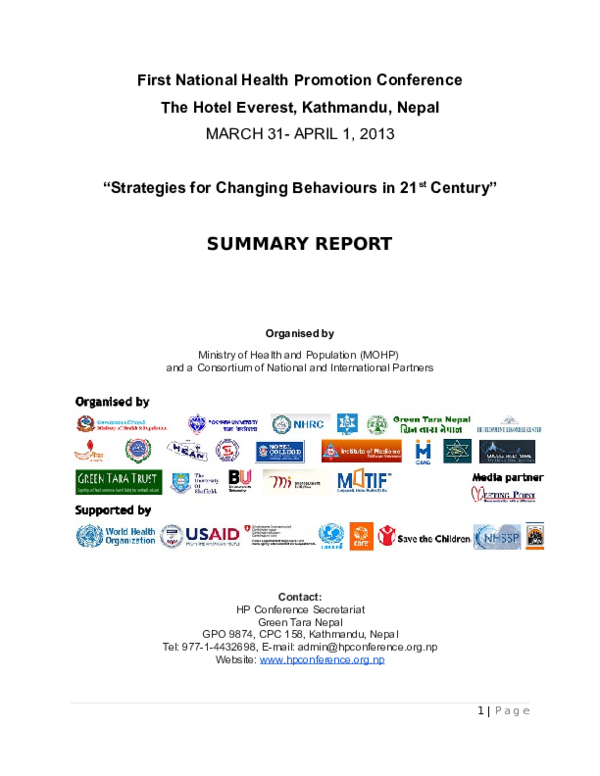 Green Tara Nepal, in collaboration with Green Tara Trust UK, Ministry of Health and Population Nepal, University of Sheffield and Bournemouth organize First National Health Promotion Conference . It is held in Kathmandu over the Easter weekend (March 30th-April 1st).  This is a unique collaboration between Bournemouth University, the Government of Nepal, international organisations such as the World Health Organization, USAID, the Nepalese media, and several universities and colleges; and will highlight the importance of health promotion at all levels in Nepal.

One of the opening plenary will be given by Prof. van Teijlingen, we will outline health promotion from a global perspective. A total of 75 papers will be presented at the conference, including one by HSC BU PhD student Ms. Sheetal Sharma. She will also present findings from the long-term research project that aimed to improve the uptake of maternity services in rural Nepal.  Her PhD research is supervised by HSC’s Prof. Vanora Hundley, Dr. Catherine Angell & Prof. van Teijlingen as well as Dr. Padam Simkhada from The University of Sheffield and Visiting Faculty at HSC. As part of the conference Prof. van Teijlingen and Dr. Simkhada will also run a skills-building workshop which offers training on writing up of findings health promotion research for academic journals.

There will be 250 participants from seven different countries including the USA, Canada, UK, India, Nigeria, the Netherlands and Nepal. This is the first ever conference of its kind to held in Nepal in the field of health promotion.

Prof. van Teijlingen said: “Nepal has a double burden of diseases.  It experiences both the kind of infectious diseases associated with being a low-income country, and a growing burden of the kind of diseases commonly associated with lifestyles in high-income countries. Therefore, is it is encouraging to see that so many different organisations have signed up to the principles of health promotion.”

Ms. Sharma commented: “Nepal is an exciting country to conduct research in, with the diverse castes and motivated rural community volunteers; also among South Asian countries, its speed of development is considerable: the Maternal Mortality rate was halved despite a decade long civil war, Abortion is legal since 2002, same sex marriage since 2008. It is important to disseminate findings to relevant stakeholders.”

Dr. Simkhada and Prof. van Teijlingen are both Visiting Professor at two Nepalese universities. They have more than sixty of research articles publish in international journals on health-related issues in Nepal.  Sheetal Sharma was funded by BU to travel to Nepal and attend the conference.  Prof. van Teijlingen was interviewed for national television in Nepal regarding the Public Health conference.

The Health Promotion conference has its own web site see:  http://hpconference.org.np/

Prof. van Teijlingen has been conducting research in Nepal for nearly a decade.  Some of the work he is evaluating is supported by Green Tara UK, a Buddhist organization based in London.